The following article was written by me (Rick Towns) in September, 2000. I thought it would be great to put it up here for posterity, as digital cameras were just becoming the norm, so the focus of my article is using film cameras. Imagine! (BTW: I'm still no good at astrophotography!)

I am certainly not well known for my astrophotography abilities; however, I have attempted some of the more basic shots through my telescope. I have found simple resources on this part of my hobby are scarce, and I thought it would be beneficial to have a simple resource available that would allow a novice or amateur astronomer to take some decent astro photos without having to read a big book cover to cover.

A great deal of detail regarding astrophotography can be found in various books, so the purpose of this section is to give you a general run down on the types of equipment you may need. For more information, I recommend "The Backyard Astronomer's Guide" by Dickinson & Dyer. It goes into much more detail than we do here. 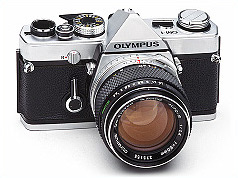 Olympus OM-1 SLR Camera Obviously, to take pictures of anything involves getting a camera. Astrophotography demands more than grabbing any camera and pointing in skyward. It involves getting the right camera for the objects you wish to photograph. Generally speaking, you need a camera that will a) give you manual control over when the shutter opens and closes, b) runs without battery power (fully manual) and c) can connect to a telescope or camera tripod. Specifically speaking, an excellent choice for all of these items is the Olympus OM-1 SLR camera. It is fully manual and can be purchased used for usually under $200.00. There are various other camera makes that also meet some or all of the requirements, but make sure you know what the camera's capabilities are (ask the sales person) before buying. One additional item you'll want to buy with the camera is a remote shutter release cable. This will allow you to open and close the shutter without touching the camera, and inadvertently ruining your pictures with the vibrations this may cause.

Once you have the camera you need, the next step is to decide how to take your pictures. For instance, if you want to take a picture of star trails, all you'll need is a camera tripod and good lens (i.e. 35mm will do fine). If you're more interested in galaxies or wide angle views of the sky, a piggy back mount for your motorized telescope is required. This allows you to mount the camera on the telescope, but still take the pictures through the camera's lens. Finally, close up pictures of the moon or planets, or detailed deep sky objects will require photography through the telescope. This requires a t-ring adapter that will fit your camera, and optionally a variable length tele-extender which allows you to use an eyepiece (for magnification) with the camera. 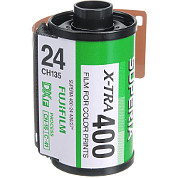 Fujifilm 35mm Cannister Choosing the right film for your subject is important, however generally ISO200 or ISO400 film will take beautiful pictures. 200 film takes longer to capture the image, but has less granularity and finer detail than 400 film. 200 is good for bright objects such as the moon or the planets. 400 film is better for dimmer objects that require the shutter to be opened for extended periods of time, and you want to capture the image quickly but effectively. A good example would be a galaxy or a globular cluster. Once you master some basic pictures, you demand for higher specification film will grow. Again, "The Backyard Astronomer's Guide" is an excellent resource of information regarding different film types and speeds.

This is the hardest part of astrophotography. Keep the shutter open too long, and you over expose your subject, too short and you get nothing but inky black. I have found that photos of the Moon or Jupiter on ISO200 film require exposure times in the 1/60th to 1/500th of a second range. I have just loaded up my Olympus OM-1 with ISO200 film, and I will build a more definitive table of exposure times very shortly.

TIP - If you get your film developed at the local photo mat like I do, take a few regular pictures (of the bushes, or your wife, etc) at the beginning of a role of film. Use the first 3 exposures in this manner before taking astro photos. The reason for this is that most automated photo processing machines need some "normal" pictures to determine the frame length while developing. If you don't do this, your picture may not be developed the way you'd expect. Also, request they DON'T cut the film, that way you can get reprints made if the film is not developed to your liking.

Kendrick KwikFocus Focus Template This is by far my favorite part of this page. I believe this will only apply to users of Cassegrain and Reflector type telescopes. What I found out is that if you take a piece of cardboard and cut it in a circle to match the diameter of your telescope, you can use it to get tack on focusing of any object. The idea is that you take the circular cardboard piece, and cut 3 holes in it. The holes should be 50% of the radius of the circle in size, and should be placed 120 degrees apart on the circle. Finally, the center of the holes should be 50% out from the center of the circle. You'll wind up with something similar to the picture to the left.

Once complete, place the template over the end of the telescope. This will be the open end of a reflector (i.e. Dobsonian or Newtonian) or over the glass corrector plate of a Cassegrain (i.e. Schmidt or Maksutov). With the camera mounted at the focuser of the telescope (either for prime focus or eyepiece projection - NOT piggy back photography), look through your SLR camera's view finder. You should see three images of your subject (i.e. the Moon). Adjust the focus on the telescope until all three images merge in the middle into one image. Once this is complete, carefully remove the focus template and look through the camera again to ensure the object is centered. It should appear much brighter than it was with the template in place.

That's all there is to it! Now just take your photo and you're ready for your next object. I would recommend re-using the template before every picture, as your telescope could shift out of focus while moving it around or adjusting the camera. You can actually purchase these focus templates, although I am unsure of the cost.

I will post more tips and tricks as I learn them. If you have any suggestions on taking astro photos, please e-mail me at: rick@deepskies.com.