Happy Cinco de Mayo! We finally had a decent chance to do some observing, so my daughter Jen and I cooked up a scheme that we’d go to sleep early, then get up at 2AM, jump in the car already packed with gear, drive to our remote observing site in Springwater and get some images of Jupiter and Saturn.

Unfortunately, even though it was a new Moon and clear out for the first time in quite a while, it was very humid and there were patches of fog everywhere. However, we pressed on, got the scope set up, hooked up the camera and got a few pictures. Jen is going to process them with some stacking software and we’ll see what she comes up with.

Jupiter was easy to acquire in my 20mm Plössl and showed a big round disk with all four main belts visible (North Temperate + Equatorial plus South Temperate + Equatorial), the Great Red Spot, and lots of colour apparent (reds, browns, yellows and white). We then popped in our Celestron digital camera which is actually for use with our microscope, but modified to work in the 1.25” focuser of my telescope. We were lucky, I think, to get Jupiter into the field of view (as we would later fail to do so with Saturn). We took some images, a video, and some burst images of Jupiter. Jen will take that data and attempt to stack it to produce a composite image that hopefully will show some of the details I was seeing through the eyepiece. Although still fuzzy (due to the fog and the low altitude of the planet in our night sky), this may wind up being the best image we’ve taken of Jupiter to date.

UPDATE: here is the image! It was processed in RegiStax 6 from a 527 frame video... 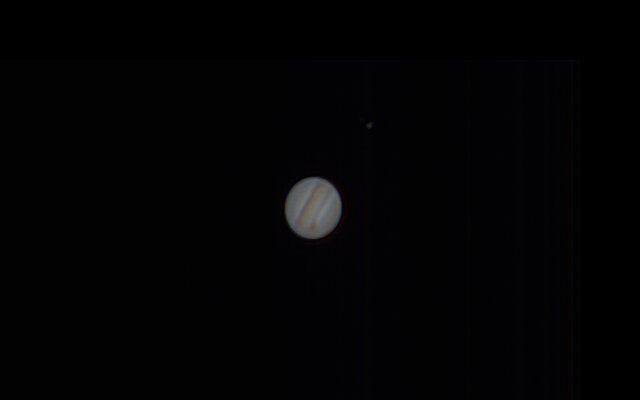 We then moved on to Saturn, which I viewed again in the 20mm Plössl - the rings showing prominently, however the details were washed out as Saturn was nearer the horizon (and thus we were looking through a lot more turbulent air) than Jupiter. We attempted to acquire it in the digital camera, but since it effectively acts like a 5mm eyepiece, it was difficult to do. I did swap in my 6mm Ortho and got Saturn in that field of view (the image was much larger, but very fuzzy and very hard to focus) but going back to the digital camera we failed to get it lined up properly.

At this point the temperature felt like it had dropped about 5 degrees and we were both getting pretty cold. The fog was getting thicker so we decided to call it a night after just 1 hour of observing. Still, it was fantastic to get out under the stars again, and I am looking forward to seeing what Jen can do with the data we collected on Jupiter.