I got a nice Canon EOS M50 for Christmas and I've been meaning to take it out and try my hand at digital astrophotography. But it's been a rough winter/spring and although I've been out observing a few times this year (2022), I haven't been logging it. Anyway, I finally decided it was time to hook my camera up to my 8" SCT and see what I could capture. I contacted my friend Creig who met me out at a parking lot beside some community soccer fields. A bunch of teams were practicing so we had to wait until they departed - eventually they did!

I got the telescope set up, connected my Canon M50 at prime focus on the Meade 2080 along with a f/6.3 focal reducer which lowers the Meade's effective focal length from 2000mm to about 1280mm. I hooked the camera up to my trusty MacBook Pro and we took some shots. I decided to start with M13 as it was directly overhead. Viewing it through a 32mm Plössl eyepiece, it didn't look very good - it was a ghostly cloud nestled between two stars. To my eye, I could make out the individual stars and it looked OK, but to my friend it just looked like a blurry gray cloud. When we looked at it through the camera on the laptop, it didn't look much different in Preview mode. But when I dialed up ISO 6400 and took a 6-sec exposure, we were both blown away! Here is the shot: 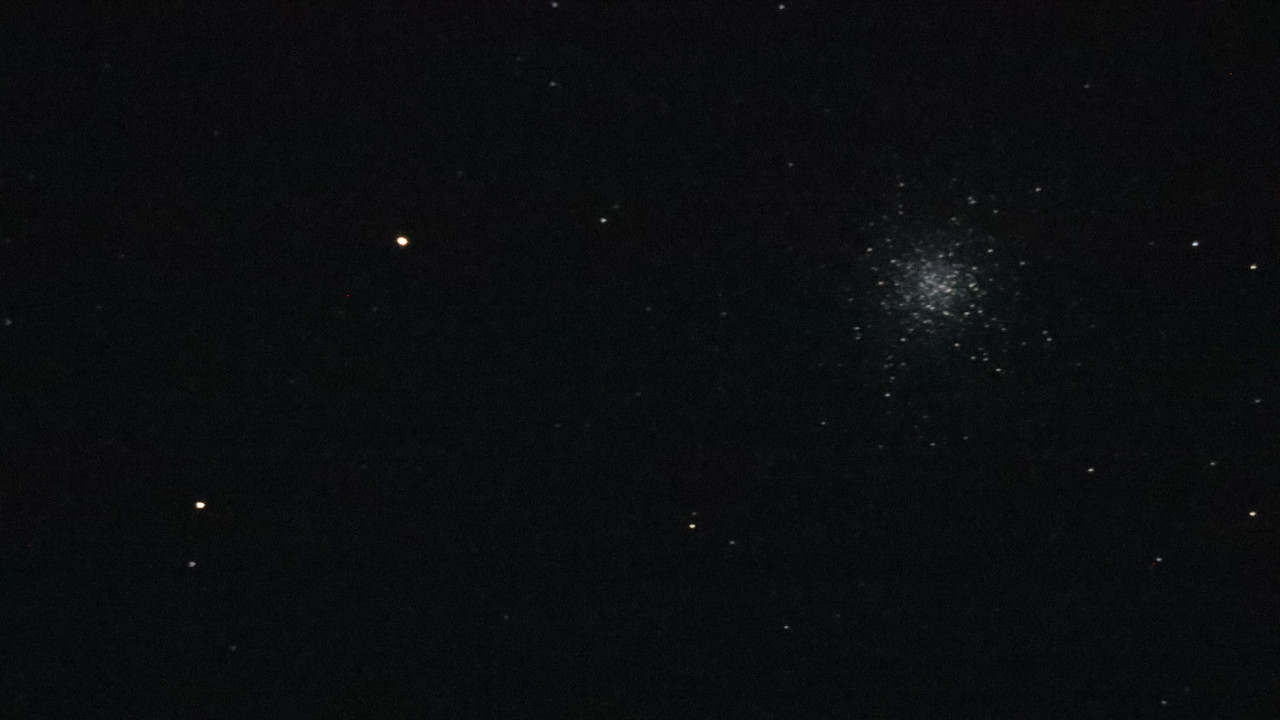 The image we captured is very similar to the visual view I had through the eyepiece - but a bit sharper and brighter. Clearly, I need to sort out some issues in the optical train, as all the stars don't appear to be round, but more elliptical. But this is a great start!

Our next target was in the nearby constellation Lyra. We zeroed in on the Ring Nebula and again used ISO 6400 and snapped a 6 second image. Our first attempt had the ring nebula to the upper right corner of the image, and after some minor adjustments, we got the ring more towards the middle. Unlike M13 which I could see through my 50mm finder scope, M57 wasn't visible at all. I just centered my view between the two guide stars Sheliak and Sulafat and hoped for the best. Here's the final shot:

A number of things went wrong during our brief (~2 hrs) session. First, my LX6 Premier mount wasn't tracking any objects. It didn't matter - I turned it off and back on, I switched between North and South orientation - regardless, objects would just quickly drift off the left side of the field of view. Finally, in desperation, I unplugged the drive base and waited 5 seconds and plugged it back in - and it started working again! We just had rough polar alignment, but after the hard reboot, the scope would keep objects centered for a good 10-15 minutes. More than enough for our quick 6 second shots.

My next issue was my MacBook - a recent driver update rendered the brightness keys non-functional, so the beautiful glass display was at full brightness all the time. Very frustrating. I have since fixed the issue, so the next time I'm out, the laptop should function as expected.

The last issue I had was I forgot my folding table to put my laptop, maps and various accessories on. I had to improvise and I put the laptop on the spreader arms of the tripod legs. It wasn't super stable, but it worked well enough and was a decent height for me sitting on my drum stool. Next time, though, I'll bring the table!

Overall it was great night out under the stars. I am very much looking forward to my next outing (SOON!) and will try to capture M51 - the Whirlpool Galaxy.