In my first outing to try digital astrophotography, I managed to capture M13 and M57. The images were just about perfect except that the stars weren't round - they were more oval. Likely issues were; polar alignment issue, poor collimation, shutter shake, or a combination of all 3. I decided on this outing to try and get some round stars. I collimated my scope, I used a different EQ5 mount that is much easier to polar align, and I set a 3-second delay between when the shutter on my M50 opens and when the camera actually starts acquiring data. I was pleased with the result!

This is the same object that I shot a little over a week ago. This image is much sharper. The stars are round, and the Ring Nebula itself is clearly rounder than in my last image. Most importantly, you can see the central star in the nebula! Overall I'm very happy with this shot. The camera was at ISO 6400, and I had my f/6.3 focal reducer between the camera and the scope for an effective focal length of 1280mm. 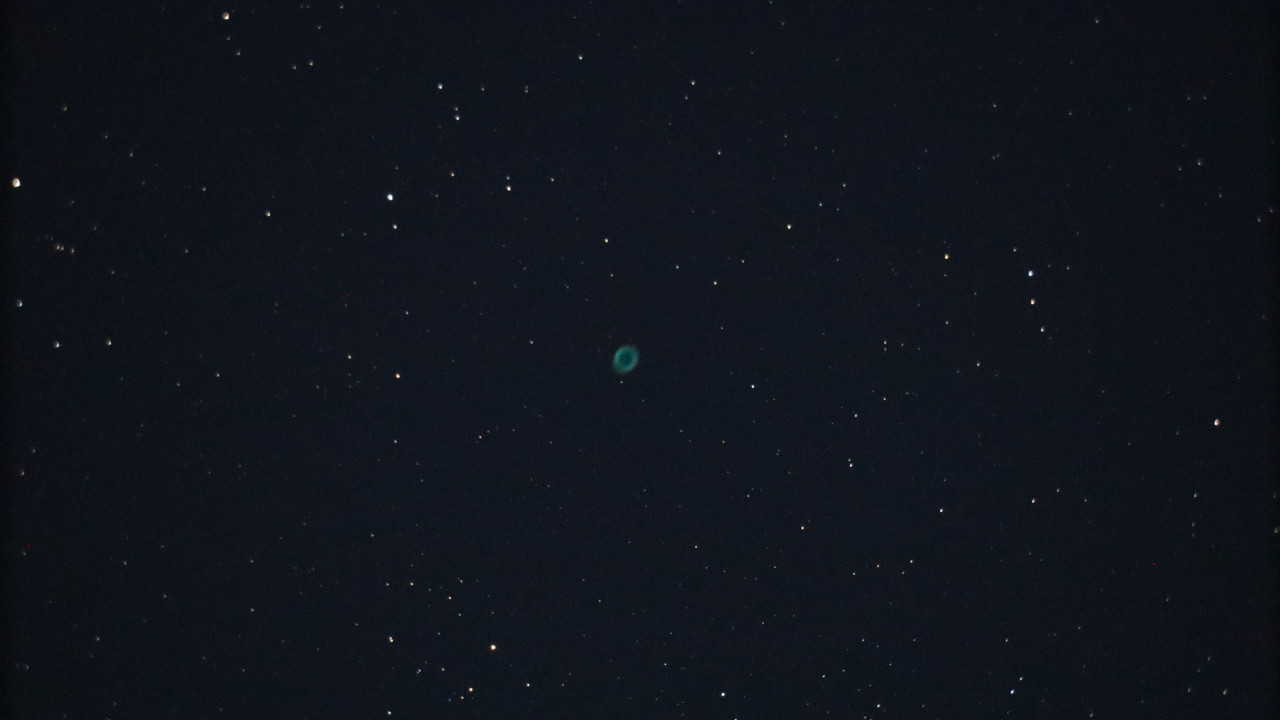 Replacing the LX6 mount with the EQ5 was a good choice. Polar alignment is a simple task of getting the mount roughly aligned, and then looking through the polar axis and shuffling things around until Polaris is in the middle. It took less than 1 minute.

Things I learned; 1) Extend the legs of my EQ5 mount to their full height. I did this session with the legs collapsed, and I was almost laying in the dirt trying to get M13 lined up. I never actually succeeeded. Part of the issue was I only had a red dot finder on the scope, so I had to rely on taking multiple shots through the camera and hope I snagged it - I did not. 2) Add a proper finder to my telescope! The LX6 had a Telrad and a bracket for a 70mm finder. This scope is an LX3 and only has a red dot finder. I'm either going to move the 70mm finder over onto it, or I also have a 50mm finder. I might try the 50mm first. 3) Bring a mouse! My MacBook Pro ran like a champ, but some of the astro software (ie: Starry Night) needs the mouse wheel to zoom in. It would be so much easier with the mouse vs the trackpad. 4) Download more star info! When I was unsuccessfully hunting for M51, I could see more stars on the camera image than what were in my astro software. So, I need to ensure I have the maximum star catalogs available, as photographic astronomy shows a lot more stars than visual observing - even at exposures of just a few seconds!

In the end, it was a short session - I went from about 9:45PM to about 10:45PM. I really just wanted to try out the changes to my rig - and they worked! I am looking forward to getting more images, as well as finding a nice, quiet, dark observing site. The spot I'm using now is too busy with cars and lighting.