Every year we go to a cottage in Red Bay for a week. This was our week, and I brought my 8" SCT with me. The skies here are usually quite good, and I was hoping to get some more astro-photos taken. However, after going through my gear, it appears that I forgot a critical adapter that hooks my camera up to my telescope. One of my sons is coming up later in the week, so hopefully he can bring it for me. In the meantime, I'll enjoy the skies "old school" by just looking through my eyepieces.

I started off with the Ring Nebula. I had photographed it a few times over the past weeks and decided to sit and have a good look at it. I started out locating it using the red dot finder on my scope and spotting it in my Meade 24.5mm super wide angle eyepiece. For fun, I jumped immediately to my 8mm TMB Planetary II eyepiece. I was surprised with how good the ring looked! Instead of a vague puffy ring, it was sharply defined with the wispy nature very evident. The central star wasn't visible with direct or averted vision but I believe it is a 16th magnitude star and wouldn't show up unless I was photographing it anyway. There was no colour visible to my eye - just tones of gray. Overall I was very happy with the view the TMB put up. 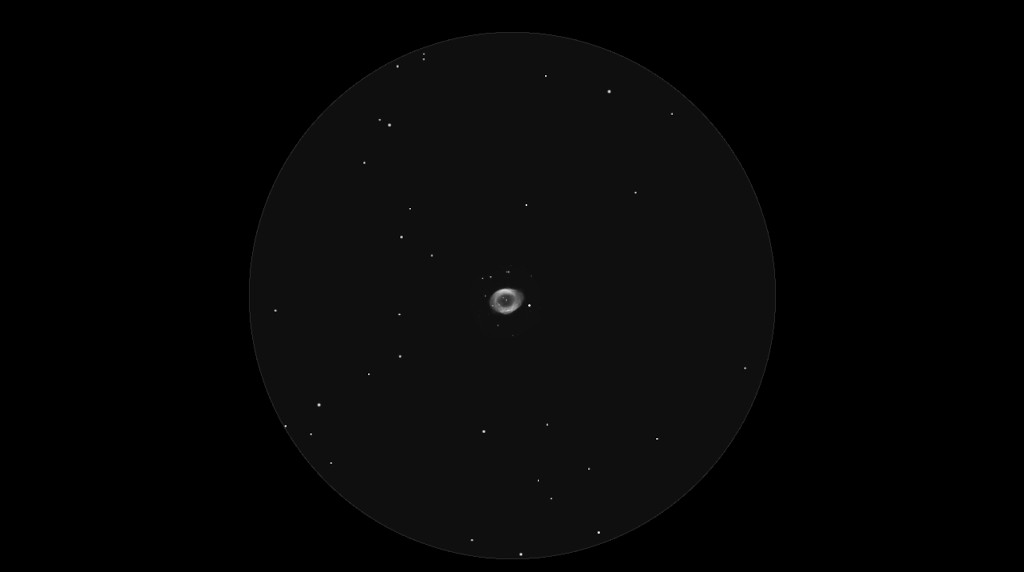 Next I puttered over to M13. The cottage has decently dark skies, but there are a lot of trees in the yard that restrict the target selection. I switched out to my 24mm "finder" eyepiece and using the red dot, slewed over to Hercules. I easily located M13 and again upped the power to about 160x using the TMB 8mm. M13 looked wonderful! A huge swarm of individual stars surrounding a bright nebulous core. This has to be one of my favourite views through an 8" telescope - M13 at medium power. Without the reducer, this view is roughly equivalent to my 15mm Plössl. I spent about 20 minutes looking at M13.

I finished my sky tour with M13's smaller cousin: M92. It is also a globular cluster, but it appears smaller than M13 as it is about 20% further away and I believe it's actually a smaller cluster. The boxy nature of M92 was immediately apparent in my 8mm TMB and lots of individual stars were seen. I forgot how engaging M92 can be! I tried some other eyepieces on M92 such as my PL20, Pl15 and PL111, but I had ruined my dark adaption by using my laptop (the screen was set to full brightness!) so I never got the same quality view as through the TMB 8mm.

By this time (around 11:30PM), the almost full Moon was making it's way up over the trees to the south east. I thought about spending some time cruising the terminator but I decided to pack it in as I was feeling pretty tired and I knew I had to move my equipment back into the cottage at the end of the viewing session. Overall it was a nice reunion with the Red Bay skies, and I hope to get out again tomorrow night with some different targets selected.