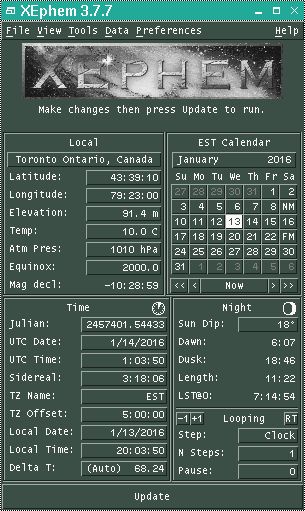 One of my favourite astronomy programs is called XEphem by Elwood Downey. It is a wonderful Unix/Linux application that not only shows you the night sky down but also a wealth of information regarding the planets and other sky objects. I have the purchased version which comes on 3 CD-ROMs. Since I run a super lean version of Arch Linux, I found there are a few things that I need to have installed before installing XEphem.

Here is what you need to have (you know, besides a working X11 system with a Window Manager):

With those items installed, you can buy XEphem from the Clear Sky Institute website, download the three tar.gz files and extract them on your hard disk drive. Each file extracts into its own folder - run the shell script in each folder (as root) and then you're ready to run XEphem!

NOTE: the default install of XEphem no longer is able to communicate with some NASA services, as they've moved to SSL. There is a user-contributed patch that enables it:

You can download the source code and extract the archive to a temporary folder, then copy the above patch file into the GUI\xephem folder inside the source code structure. From that folder, run the following commands:

There are several files that will get patched - you will be prompted for their names as the patch utility runs through them. You'll see the name to type in from the output just above each prompt. Once it is complete and all the files are successfully patched, you can run "make" to create a new xephem executable. Copy this new file over top of your old one (ie: /usr/bin/xephem) and you're all set!