Don't know the difference between an LX3 or an LX200? Perhaps you just bought a scope used and the owner wasn't sure what it was? You can use this handy guide to help identify Meade's LX3, LX5, LX6, Premier, LX10, LX50, LX100 and LX200 telescopes. The information for this guide has been gleaned from the Internet, so it may contain inaccurate information. If you spot an error, please let me know (rick@deepskies.com) and I'll make the necessary corrections.

In late 1980, Meade introduced the 2080 - an 8" Schmidt-Cassegrain telescope designed to compete with Celestron's C8 telescope. The fork-mounted drive system included a worm gear which was an improvement over Celestron's spur gear design. The original 2080 drive base (and the 2120 which was introduced in mid-1982) was upgraded with Long eXposure accuracy of improved drive gears in the LX Drive Base in the fall of 1983. All the units look very similar and are easily identified by a flat panel base with no switches or sockets - just a serial number plate. It is driven by a 120V computer-style plug located underneath the drive base. LX models are denoted by an "LX Drive System" plaque on the top of the drive base. Meade brought back this basic configuration in 1992 as an entry level option to its new LX200 line. 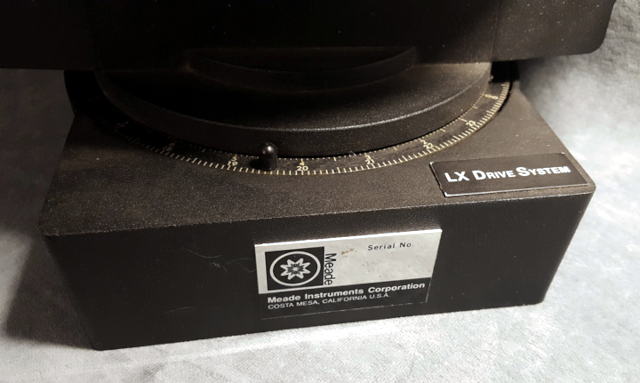 In early 1984, Meade released a new package called the LX2 that included the LX drive system plus upgraded eyepieces and a better finderscope. It is unsure if the actual drive system was improved/more accurate than the original LX system. The appearance is apparently the same as the LX with a flat front panel with just a serial plate - but I have never seen one. Please contact me at rick@deepskies.com if you have some more details regarding this model (including photos!).

The LX3 was introduced at the beginning of 1985 and these are much easier to differentiate from the base LX. It has a DIN-style socket for the hand controller, as well as a reticle adjustment knob and a few other switches and sockets. It is now either powered by 12V DC or 120V AC and is driven by a quartz-crystal drive for improved accuracy. It would appear the LX and LX2 were produced along side the LX3. The LX3 was available with either the 2080 or 2120 OTAs. 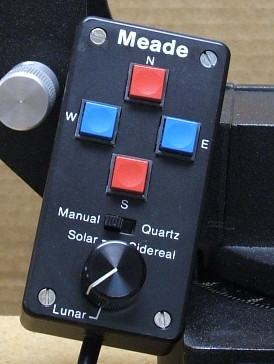 Apparently in 1986, Meade thought about releasing an LX4 model, but decided not to. According to Company Seven's Meade history page: "We observed the announcement of the Meade LX4 telescopes in the late 1980's with the line drawing ads that appeared - while some samples were assembled at Meade no LX4 was ever actually sold; this did not stop a prominent New York mail order house from advertising "in stock now" for some time. Meade probably made a good choice not to market the LX4 after evaluating their pre production models." Here is one ad that talks about taking "LX4" orders:

This base still only has one DIN-style receptacle, but it now includes an amp gauge. The motor is now all DC powered (12V) and the hand controller has more functionality. The actual face plate is now angled upwards towards the observer instead of being flat like the LX/LX2/LX3. The LX5 was available with the 2080 or 2120 OTAs. 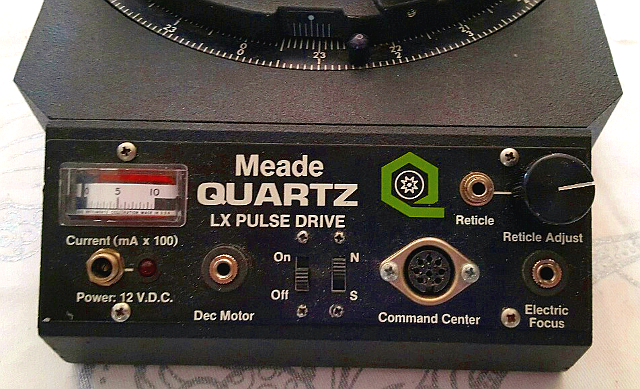 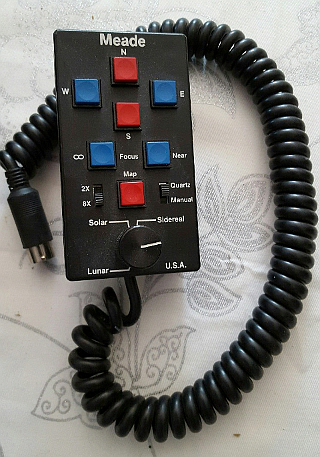 Meade introduced it's f/6.3 optical system in 1989 as the LX6. It continued to sell the f/10 systems as the LX5. In 1990 it consolidated its product lines into the Premier line where you could specify f/6.3 or f/10 optics. The LX6 drive base is notable for having 3 DIN-style receptacles, plus the amp gauge as well as other switches and receptacles. The hand controller now has a digital readout that works when the encoders are installed. Again, the LX6 came with either the 2080 or the 2120. 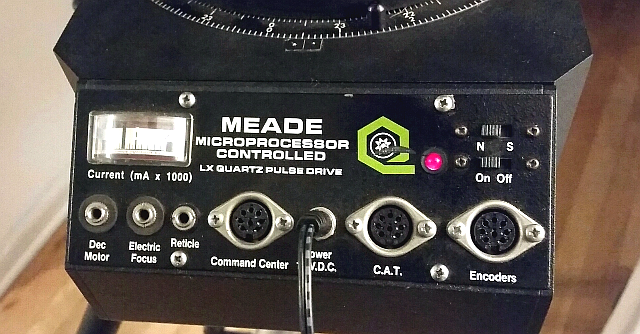 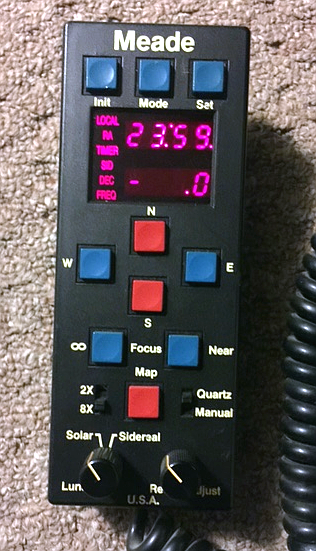 Introduced in 1992, the LX200 was an evolution of the LX6/Premier line. The big change? GoTo was now part of the package (where as an LX6/Premier with digital setting circles and the "CAT" system could be considered a SlewTo system). LX200's are easy to spot because they say "LX200" right on the control panel! 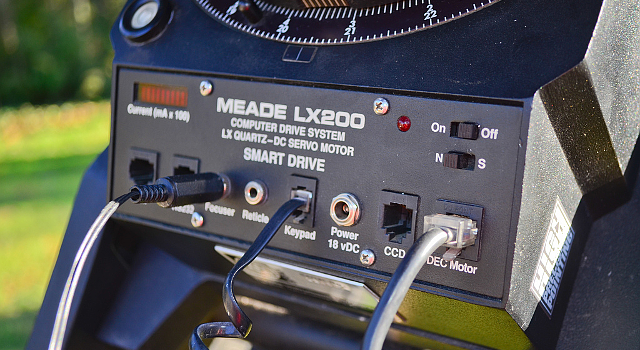 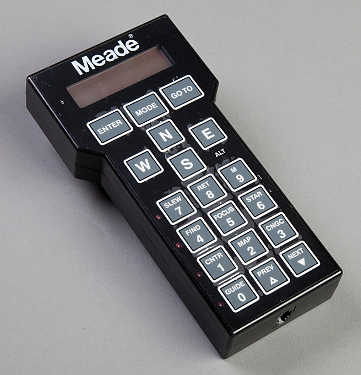 When Meade brought out the GoTo LX200, it continued to provide non-GoTo fork-mounted SCTs in the form of the LX100. It was pretty much idential to the LX200 minus the brainy computer. But it did have programmable periodic error correction as well as a hand controller. Again - easy to spot as "LX100" is right on the drive base! 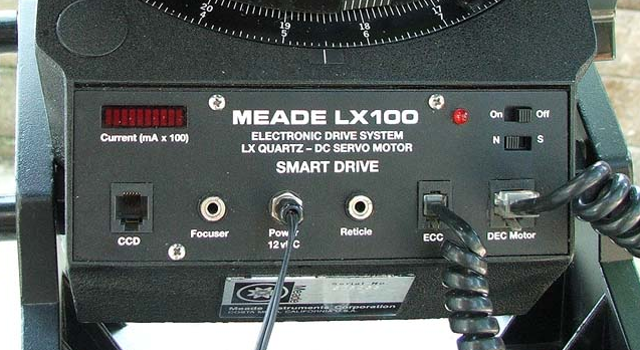 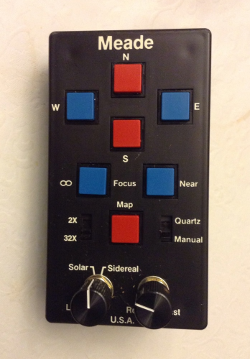 Meade cancelled the LX100 quietly in 1995 and filled the role of non-GoTo fork mounted SCT with the LX50. It was a stripped down version of the LX100 and didn't even include PPEC! But it is easy to spot, as it says "LX50" on the drive base. 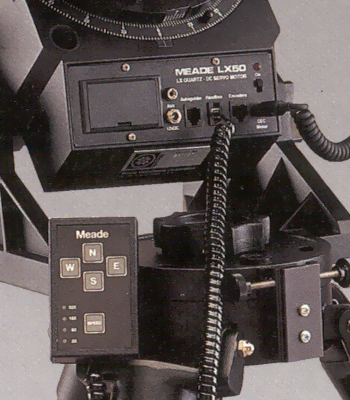 Meade LX50 Drive Base and Controller

After the introduction of the LX200, Meade brought back the basic 2080 LX as its entry level SCT. In 1996 the LX was upgraded to the LX10, which now included a hand controller. Interestingly, the drive base of the LX10 bears a striking resemblance to the original LX drive base! Once again, they are easy to spot with "LX10" printed on the drive base. 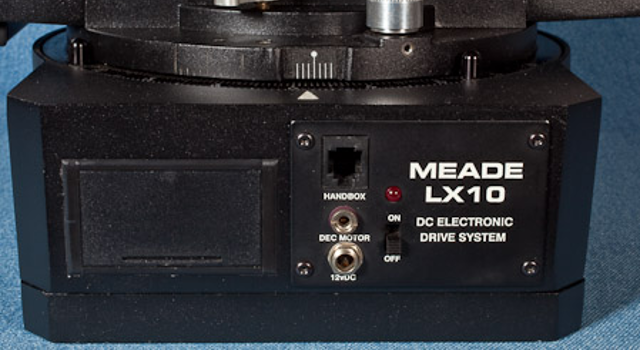 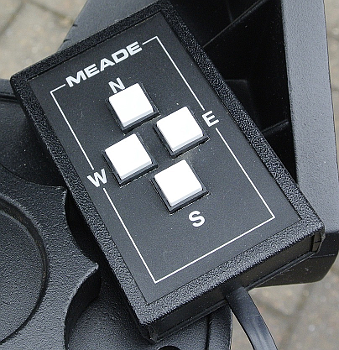